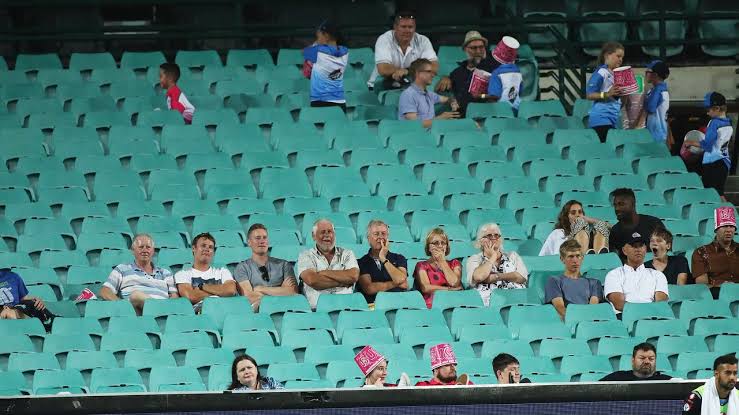 The New Year’s Eve BBL fixture between the Strikers and the Thunder pulled a lousy 9,500 people. Clearly, the pandemic has severely affected crowd numbers in the BBL’s 11th season. But it might not be the only reason people aren’t interested.

The Adelaide Strikers have never performed so poorly in a BBL season. With just one win to their name, things are looking mighty grim for Jason Gillespie’s squad. The question is, does anyone really care?

Adelaide sports fans are nothing if not loyal and enthusiastic. Even if a global pandemic hadn’t swept the planet over the last two years, the BBL was on a downward trend in average crowds anyway. In the three years to 2019-20, the BBL average crowd numbers fell by several percentage points each season. At the time, the league argued it was because they’d extended the season. Then they argued it was because they’d condensed the season again. And now they’re arguing the huge dive in average crowds for 2020-21 and 2021-22 is all to do with the pandemic. Yet, cricket remained one the few sports only lightly affected by restrictions in 2020.

Thing is, novelty is like a red hot love affair. It’s insanely good while you’re in it. Head spinning, heart thumping, endorphins running wild. But as the old adage goes, the brightest flame burns quickest.

BBL was new and shiny and exciting for five or so years. It reached a peak during the 2016-17 season. But then something happened that took the cricket watching public by surprise. Especially in Adelaide. On the 4th of February 2018, the Strikers beat the Hurricanes in front of 40,000 at a heaving Adelaide Oval. I was in attendance. After the last ball was bowled there was cheering indeed. People were clearly happy. But what struck me at the time, and what I haven’t been able to stop thinking about since, is that the celebrations lasted all of maybe ten minutes. After that, people turned their attention to gathering their things and the journey home. Leaving the ground there was no real feeling. No one was particularly excited. We didn’t go for a celebratory drink. We didn’t speak about it in the days afterward. There was no analysis of our favourite player performances. It was just a sense of, well that’s nice.

It simply didn’t mean anything. We were left wondering why we’d wanted to win it in the first place.

If either Adelaide or Port Adelaide won an AFL premiership, this city would blow its stack. People would line the streets for days. For a month you’d not be able to talk about anything else in a bar or a cafe. The win would etch itself into the very fabric of the city’s history, as the 1997, 1998 and 2004 flags have done. Among Adelaide fans, the now twenty year old premierships are still spoken about often and at length.

Yet, here we are four years after the Strikers won the BBL and I can’t remember speaking about it even once.

Some might argue that you need to give a fledgling competition time to build the kind of meaning that Australian Rules has done over 150 years. To which I’d argue, yes you very much do. But, and here’s the knockout blow, you can’t do that through a culture of batter-biased, firework focused, hit and giggle, money making trash. Which is exactly what the BBL is.

You know what cricketing moments my mates and I do still speak about years later? Every single session of test cricket we’ve ever seen at one of the greatest cricket grounds in the world. Because test cricket has meaning. Players want to play it and they want to win it more than they want to be paid by it. Some would probably do it for free.

So yes, it takes time to build meaning in a young competition. But while the focus of the league remains on revenue and not on culture, the trajectory of the BBL doesn’t look good.

The ways in which the meaning can be grown inside the BBL are obvious.

These are but a few. Sadly, we know they’ll fall on deaf ears. Because the ‘game day experience’ marketing machine crowd have their hooks too far into T20 now. But if a move isn’t made, BBL is in danger of becoming a true Who Cares Cup post-pandemic. The natural assumption is crowds will return once we’ve moved into the endemic stage of the virus. But without some sign from the league that they’re making an effort to inject some value and meaning into the competition, most punters I know won’t be bothering to attend.

Sure, fireworks and multiple activations for the kids are great. But I’ll finish with this thought:

I don’t love football because of the bouncy castles they had at Norwood Oval when my Dad took me there aged 6. In fact, there were none. No, I love football because he knelt down next to me and explained who Michael Aish and Garry McIntosh were and what they were trying to do with the ball.